On both sides of the Atlantic, liquid democracy continues to strike a chord in the field of democratic self-organization. By embracing individual freedom of choice, it seeks to reconcile the idealistic appeal of pure democracy with the practicality of representation. Liquid democracy is of particular interest for democratic governance in civil society organizations, legislative bodies, and cooperatives.

In this film, Thomas Mann Fellow Andreas Nitsche reaches out to academics and pundits from both sides of the Atlantic for a discussion on the potential of liquid democracy.

Featuring multiple perspectives from a variety of disciplines, the experts elaborate on the idea of liquid democracy, and its promise of empowerment. They explore various application fields, from caucus negotiations and democratic governance of organizations, to civic participation and constituency empowerment.

The film also recognizes the American roots of liquid democracy, and showcases examples of current research in the field. Finally, the experts discuss deliberation and informed decision making in light of growing tribalism in US society and examine how liquid democracy can bridge the political divide.

Democracy appears fragile, and our societies are increasingly polarized to the point of segregation. Yet democracy is resilient as long as we stay vigilant, learn the right lessons from history, prioritize the rule of law and decency over faction and expedience, and allow democracy—in the words of Thomas Mann—“to renew and rejuvenate itself by again becoming aware of itself.”

The internet and technology, in general, create new challenges for democratic culture, but also new chances for public debates, undertaken with mutual respect and a commitment to truth and facts. We need to listen to one another, allow our ideas to be challenged, and find strength in political differences. In the long run, pluralism, openness, and seemingly inefficient negotiations make our society less susceptible to populism, and our democracy more resilient. Just like the Parisian salons in the 19th century, online platforms can expose participants to ideologically cross-cutting content, challenge views, facilitate informed decision making, and be instrumental in the construction of a vision for the common good.

The renewal of our democracy can neither be isolated from historical and cultural contexts, nor the challenges and new horizons of technology, migration, transnational realities, and globalization.

Arts, humanities, science, and technology—Democracy needs all hands on deck! 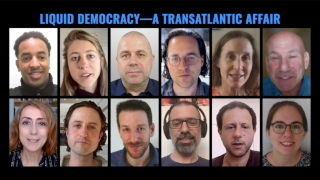