NIMD hosts the international launch of “The Principles of LiquidFeedback”

On 28 January 2014 the Netherlands Institute for Multiparty Democracy hosted the international launch of the book The Principles of LiquidFeedback, which deals extensively with the open-source software LiquidFeedback.  Preceded by a Foreword by Dr Will Derks of NIMD, the book discusses in over 200 pages all the relevant aspects of such an innovative democratic tool; from state-of –the-art voting theory to possible areas for application.

The launch was attended by representatives of Dutch political parties, ministries and NIMD’s partner organizations, among others International IDEA (Institute for Democracy and Electoral Assisstance).

The first copy of the book was presented by one of the authors, Axel Kistner, to Ingrid van Engelshoven, deputy mayor and alderman for Education and Public Services of The Hague. As an alderman Ms. Van Engelshoven knows how challenging it is to get citizens to participate. She has introduced a toolbox within her political party, D66. The idea behind the toolbox is to come up and experiment with innovative ideas to engage citizens. Van Engelshoven: “I can’t say that I fully understand the maths behind the software, but it looks easy to use. Our toolbox team will be very interested to read the book.”

Collective decision-making
LiquidFeedback was produced especially for political parties by the ‘Verein für Interaktive Demokratie’ in Berlin to facilitate internal democratic processes, but it can also be used for collective decision-making in other contexts. Governments, parliaments and municipal councils can use LiquidFeedback to poll the opinion of the public while not being limited to yes/no–questions: Citizens may rephrase the question and provide unforeseen answers. Usage may range from nonbinding suggestions to binding decisions, from facilitating direct democracy to supporting and reinvigorating representative democracy.

Visit the website of LiquidFeedback for more information about the software.
Here you can read an interview with Ingrid van Engelshoven in the online magazine of ‘Binnenlands Bestuur’. 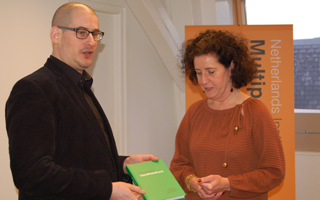 Ingrid van Engelshoven, deputy mayor and alderman for Education and Public Services of The Hague receives the first copy of “The Principles of LiquidFeedback”
The Hague, The Netherlands Photo: NIMD